Kangal is a dog breed that in its native land is also called the Anatolian Karabash, which translates as “black head. In other countries, the name – Anatolian sheepdog is used, but Turkish breeders do not accept it. Kangals are valued and respected in Turkey, so they are not allowed to leave the country. In addition, being outwardly similar to Alabais, any breeder will tell you that the Kangal is a special and exceptional dog and there is no point in comparing it to others. So who is the Anatolian Karabash actually?

The origin of the breed

These dogs have been around for centuries, but the breed itself was recognized relatively recently. The Kangal is an ancient breed that has existed in Asia Minor since Babylonian times. Today, it is a Turkish guard dog. Breeders have been improving the qualities of the kangal for several centuries by crossing it with various large dogs. 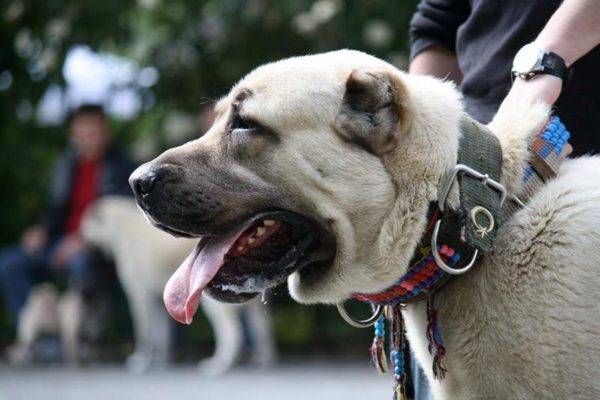 In ancient times, lions were hunted with kangals. Although these dogs were used to work with herds, they did not herd cattle, but guarded them from predator encroachments. Such a protector – strong, powerful, but also light and fast, could easily catch a wolf.

The modern Karabash is a national treasure; it is forbidden by law to take purebreds of the breed abroad. Besides, the breed is concerned about its purity and even those having insignificant deviations from the standard accepted here in Turkey are strictly culled.

As the dogs with pedigree can not appear abroad without an owner, RKF doesn’t include breed in pedigree book, and to get Turkish “0” pedigree for a dog without documents is very difficult. But in any case, register pedigree doesn’t allow its owners to participate in breeding and all litters are illegitimate. Naturally, this state of affairs negatively affects the development of the breed as a whole.

Description of the Kangal breed

The Kangal is a tall, statuesque animal that ranges in height from 70 to 90 cm. Dogs weigh from 50 to 70 kg, have a strong frame with powerful legs, a strong neck and a well-developed musculature. Anatolian Shepherds move smoothly and vigorously. Because its head is in line with its neck and back, the animal looks like it is crawling.

Representatives of the breed can be disqualified due to color abnormalities, underdeveloped paws, and increased aggressiveness. The standard specifies the following description of the dogs:

The Anatolian Karabash hair may be short, about 2.5 cm long, or elongated, up to 10-15 cm. The hair has flat texture, around the neck it creates a thicker layer. The wool cover is tight to the skin, on the ears, limbs and in the area of the tail it can be a little “pinnate”.

The Turkish Shepherd has an abundant, dense undercoat that protects the animal during the harsh Anatolian winters and summer heat. In addition, the coat has an outer layer that prevents moisture and snow from penetrating the skin. Such a coat provides excellent body temperature regulation, and its density protects the dog from the fangs of predators.

Turkish dog breeding organizations do not classify fur color as a distinctive breed trait. Presence of black and white spots, longer coat are not a sign of interbreeding. The KIF standard does not specify a dog coat color, but there are some indications for white spots – they can be located only in the area of a breast on the end of a tail. In other organizations, they are allowed on the paws as well.

Other clubs are more sensitive to the given question, moreover, the hair color is the main difference between kangal and other kind of Turkish dogs – akbash.

Wool must be short, dense, not long and not fluffy. Colors are allowed as follows:

The obligatory condition is that the muzzle of the Kangal must be covered with a black mask and the ears with black markings. White markings may or may not be allowed, it all depends on the standard applied.

Before describing the character of Anatolian sheepdogs, it is worth considering their purpose. First of all, representatives of this breed are hard workers, human helpers, able to work even in the most difficult conditions, not needing special care.

There are many stories when a Karabash found a sheep and guarded it for several days without food and water. In addition, the karabash that fought a wolf would often come out the winner. In this case, the shepherd would reward him generously with the biggest sheep.

Such activities demanded independence from dogs; they had to make decisions without human help. Not surprisingly, the kangal is quite an independent dog. He needs a brave, strong-willed owner, confident in himself. It is forbidden to cause excessive anger in the pet during the educational process. If you use harsh methods during training, rudeness, the dog can become an unruly animal. 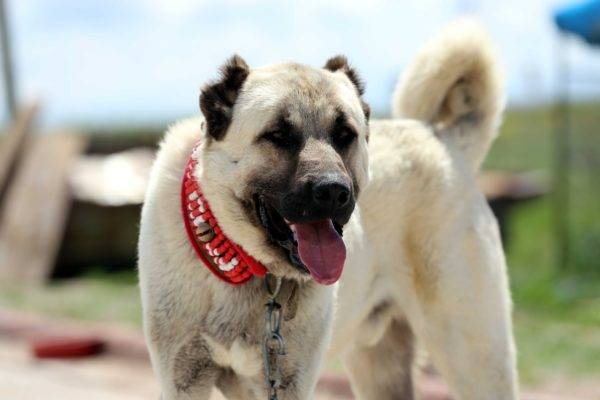 Kangal looks tough and its size is impressive, but it will find a common language with children. The dog can patiently endure careless pranks of children, he will guard the child, looking after him. During the games he behaves very carefully. But you must teach your child that the dog is not a toy and must not be hurt.

This breed is an excellent guardian with great innate qualities. He has a strong sense of territory, and the dog will defend the property entrusted to him to his last breath. Anatolian Shepherd barks loudly and resoundingly, but it will not raise its voice for no reason.

He can be willful, but if he’s worked hard and regularly, he won’t have time to be unreasonably aggressive or naughty. The breed is mentally stable and friendly to all family members. To this day, they are used in dog fights, and quite often these dogs win, even in fights with alabais.

The Kangal is intelligent and obedient, and its main purpose in life is to serve its human. Therefore, training can yield amazing results. Training should begin as early as possible, paying particular attention to early socialization. The puppy should live and socialize with people, go outside the house, see and get to know his fellows.

The method of motivation is used in the training of Anatolian sheepdogs. The owner is required to be firm, confident, he must be respectful of his pupil. Large, stern-looking dog literally “melts”, receiving a portion of deserved affection or praise, later he will strive to receive it even more.

But the cruelty, humiliation, rudeness can nullify all the results and embitter the dog. In addition, if such a serious dog feels threatened by the owner, he may try to protect himself. Naturally, this can turn out badly for humans.

Most representatives are sensitive even to changes in the intonation of the owner’s voice, so you can easily do without harsh correction. Kangals are excellent at learning a basic program, but it is important to constantly fuel the pet’s interest by introducing new, interesting tasks. The authority of the owner is important in training, the dog should take him as the leader, without questioning the decisions he makes.

Anatolian sheepdogs are unpretentious animals that do not require special procedures. They are prone to severe shedding, during these periods it is advisable to comb out the pet, helping it to get rid of the old hair faster. During the rest of the time it is enough to do it once a week and a half.

The dog should have a resting place and at least two bowls for food and water. It is important from puppyhood to accustom him to the fact that he can sleep in his own place, not on the owner’s couch. Otherwise, later it will be almost impossible to kick the dog-catcher out of the favorite furniture. 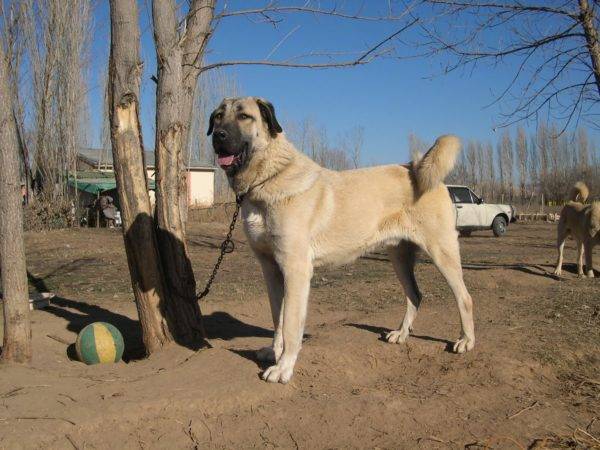 These big dogs are washed infrequently, in summer it is enough to let the dog bathe in the local pond. In winter, instead of washing, you can rub the pet with snow. The dog needs regular walks, the duration of one walk should be at least 40 minutes.

Representatives of the breed have excellent health, they have no special, specific ailments. But, like other large dogs, they often suffer from joint inflammation and connective tissue dysplasia. The development of such pathologies is affected by the weight of the body, excessive loads and excessive motor activity, in addition, dysplasia can be inherited.

Another problem not alien to Anatolian sheepdogs is a decrease in immunity. This is due to the later development of the immune system, the processes of its formation in Karabash are completed later than in other dogs. Owners and veterinarians should also take into account the high sensitivity of these dogs to anesthesia. A test is required before using such preparations.

Statistics indicate a number of diseases that are more commonly diagnosed in kangals:

Many owners make the mistake of overfeeding their dog. In fact, carabobs need less food than their similarly large brethren. The same is important to consider when feeding the dog dry food – you can not increase the portion, it is enough to follow the table indicated on the package of the product. 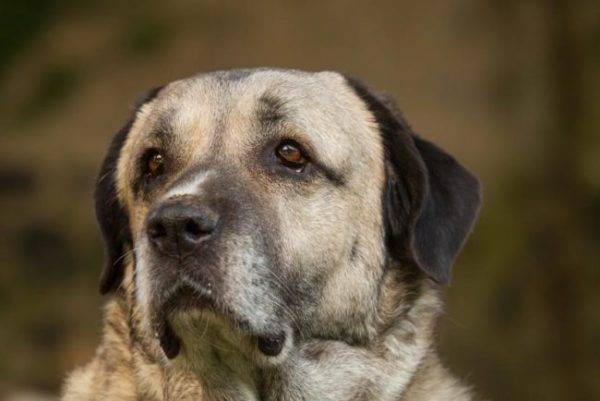 Proper nutrition should be paid special attention to since the puppy’s age. Only by getting everything you need, the dog will grow up to be a strong and healthy pet, without bone and joint problems. For natural feeding, it is recommended to give the puppy calcified cottage cheese, ground eggshells, bone meal. It is advisable to consult a veterinarian about suitable vitamin complexes.

The adult dog is fed twice a day, it is advisable to stick to the regimen. Turkish Shepherds drink a lot of water, so you should provide a large, deep bowl and make sure there is always fresh water in it. It should be changed when feeding. Kangals are neat and tidy, and they do not spread excessive dirt in their place.

Anatolian Karabash is not an apartment option, and there are a number of good reasons for this:

Sheepdog must guard the house, the surrounding area and people. It is desirable for him to be in the yard all the time and watch the events going on around him. It is not desirable to keep the pet on a leash, ideally, if it can move freely around the yard.

Photo of a kangal 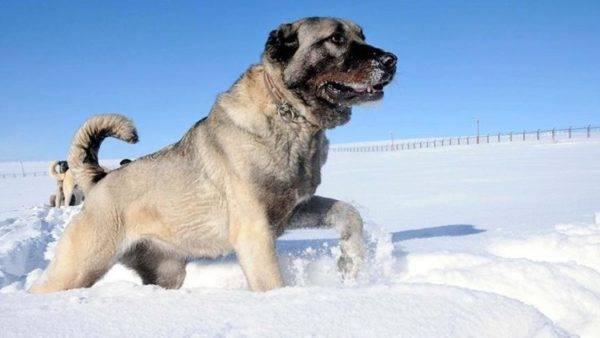 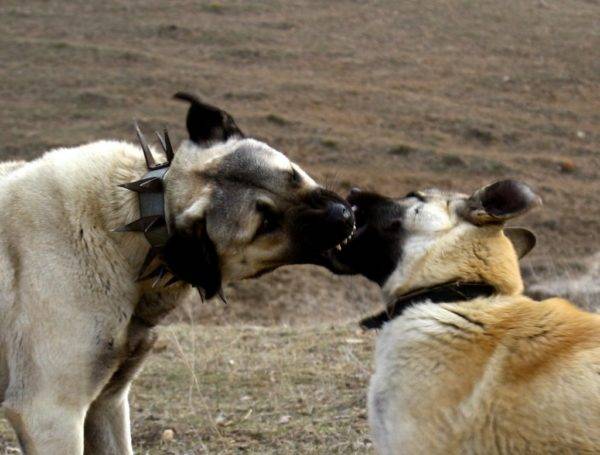 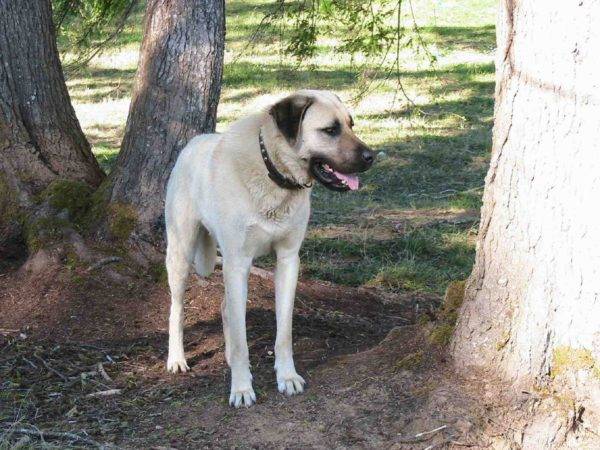 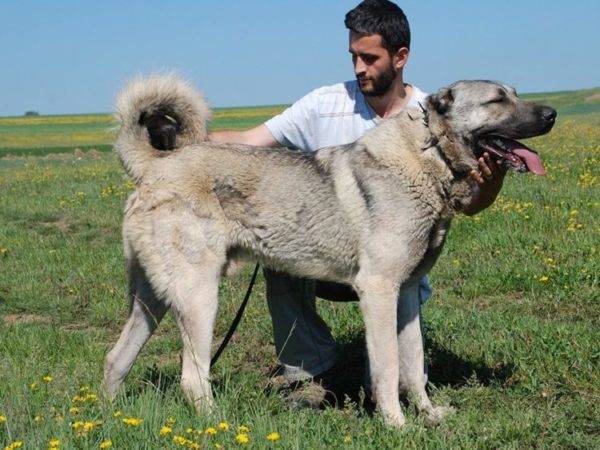 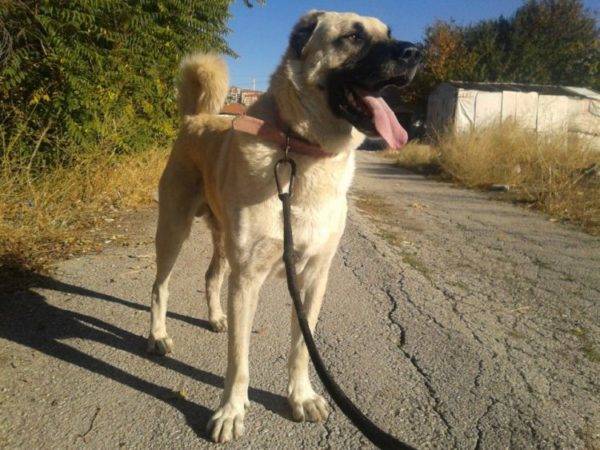 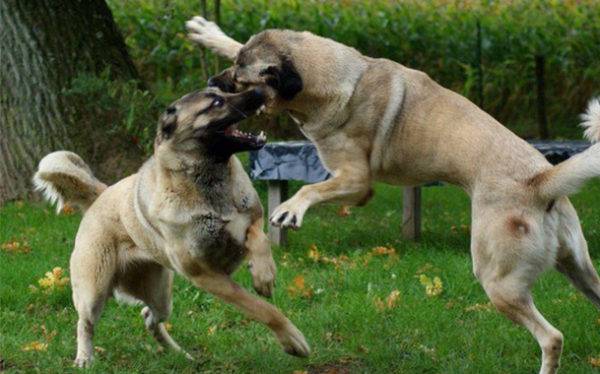 A video about the Kangal

The Anatolian sheepdog is a rare and expensive pleasure. But interest in representatives of the breed is constantly growing and is fueled by the Turkish ban on the export of purebreds.

Even at the poultry market puppies without documents, but similar to Kangal, will cost at least $1200. But private breeders set the price at $1200 – $2500. Naturally, they cannot guarantee health and quality of offspring.

There are also breeding kennels – mono-breed or engaged in breeding of other, but related breeds, such as alabais. The cost of the puppy will be on average $2500  – $3500, for the elite baby have to pay much more $4000.

Kangal is a dog with a lot of advantages, but such a pet is not suitable for everyone. He is capable of being willful, stubborn, and only a strong hand can make him the best guard and loyal friend.