The Drathaar is a versatile hunting dog whose working qualities will not leave hunt lovers indifferent, and its original appearance will not leave people around. A characteristic feature of the Drathaar appearance is a stiff coat, which gave the breed its name. Literally “Drathhaart” translates as wire coat (hair).

In Germany, the home country of the Drathaar, there were good hunting dogs that Germans were very proud of. But all these dogs, as a rule, were highly specialized. And then cynologists had the idea to get a universal hunting dog, which would combine the best working qualities of the known breeds. At the turn of the XIX-XX centuries work with genetic material began. The basis of the breed became German:

Up to the beginning of the 20th century there were disputes about the exterior, the origin and the working qualities. And although drabhaars appeared at exhibitions, they varied greatly in the quality of coat and the presence of beards and whiskers. 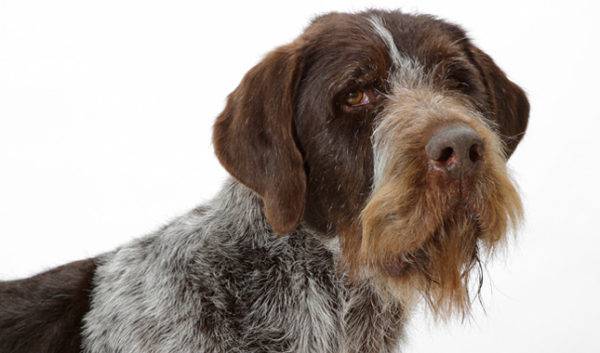 The standard was first formulated in 1890. Improvement of the breed continued, and societies were created that called for the restoration of the original breed of brindle-haired hounds. In 1924, the breed standard was adopted, and the Drathaar began to be exported from Germany.

During World War II it was difficult to ensure the purity of the breed and until 1965, when the breed standard was finally adopted, blood from other hunting dogs was allowed to be injected once.

Drathaars are popular not only in Germany, but also in the countries of Europe and America. Even in our country there is a cynological club “German Drathaar”. It is located in St. Petersburg and unites connoisseurs of these rare dogs.

Description of the breed Drathaar

German Drathaar is a medium sized dog. Height at withers of male dogs is 61-68 cm, and bitches – 57-64 cm. Weight is 27-32 kg, but can reach 40 kg, as the breed standards do not specify the weight of the dog. The standard describes purebred representatives as follows:

Thanks to its well-developed musculature, long limbs and absence of noticeable fat layer, the dog moves easily and straightforwardly, jumping high. When moving, you can feel the power and impetuosity. The movements are sweeping, but smooth.

The broad chest and rounded ribs interfere with the voluminous lungs, which increases the dog’s stamina in pursuit.

The coat is stiff, wire-like, tight to the torso. The undercoat is dense and thick. Longer hairs form distinctive eyebrows, whiskers, and beard. The hair is somewhat shorter on the back of the legs, tail, and belly. Length of hair on body and head does not exceed 2-4 cm. Its coat protects well against injuries when crossing the bushes, bad weather and cold, but it does not hide its strong and flexible body.

The color is mostly dark, dominated by coffee color. It can be solid, dilute feathery with clearly visible mottling, with graying, or steel-gray with coffee. There is a black coloration with gray, sometimes solid black.

Happy owners of darthaars note their extreme affection for their housemates, especially their owner. These dogs are possessive and one-woman dogs, they yearn for solitude and want to spend as much time with people as possible.

This versatile dog has strong not only hunting but also territorial instincts, so it will guard property and territory with zeal and courage. The dog is distrustful of strangers and may be vicious and wary of them.

The Drathaar is an intelligent, shrewd dog capable of making independent decisions. These traits are highly valued when hunting, but can cause trouble in training.

Great with children. Active mobile dog is ready to run and play with kids all day long. With early socialization he tolerates pets well, but may be intolerant of members of his tribe and chase away cats. But this is not a feisty character and aggressiveness, but a hunting instinct. 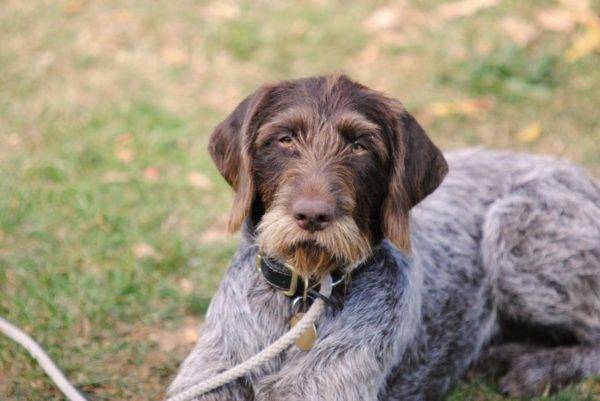 There is also some tendency to run away, but this trait will manifest itself if the dog is not occupied with any interesting activity for him. Running away from home, the dog is looking for new experiences and adventures.

The Drathaar does not impose its love, but attentively follows its owner, expecting tasks, encouragement and emotional support from him. In the conditions of a city apartment, the Drathaar is bored and can be mischievous – to spoil furniture, decor items, shoes. The dog’s character is fully realized when hunting, though with professional training and education it can perform a variety of functions.

Training a drabhaar requires patience, knowledge of the characteristics of the character and natural inclinations. Volitional qualities and independence of the dog can negate all the efforts of an inexperienced dog trainer. Nervous system of a dog is organized in such a way that allows it to switch instantly to different activities, so the tasks in training must be interesting, varied and not take much time.

The dog is happy to do exercises that engage his wit, intelligence, good physical attributes and a tendency to search. Although cynologists speak of the good receptivity of darthares to training, the entire process can take up to ½ year and should be done in stages.

When training a hunting dog puppy, a trusting relationship must be established between the “pupil” and the “teacher.” First of all the puppy is taught to be fearless – not to be afraid of loud sounds, water, dark dense thickets. Puppy must not be beaten, shouted at or punished.

Rudeness can lead not only to stubbornness and unwillingness to obey commands, but also to aggression and fear. Putting a drabhar into training is a long process requiring perseverance, patience and knowledge. After all, the hunting instinct does not include some of the requirements important for a good all-round hunting dog and they need to be instilled.

The Drathaar is unpretentious in its care. Its dense, stiff coat does not require grooming, frequent washing, or bleaching. But it has a dense undercoat, which falls out in the warm season and gets thicker in the cold. To rid the dog of dead hair, it needs to be combed out regularly, especially during the moulting season and when kept at home.

The dog sheds a lot seasonally, and daily combing will save the owners from wisps of hair in the apartment. Combing is performed with a special brush with metal teeth, as other types simply cannot cope with “wire” hair of a drabhaar. Some owners prefer to have their dog’s hair cut with a hair dryer in order to relieve themselves of hair care in the moulting period.

Healthy teeth are important for a hunting dog, so they need to be carefully cared for by brushing, plaque removal, timely inspection and treatment of sick and damaged teeth. 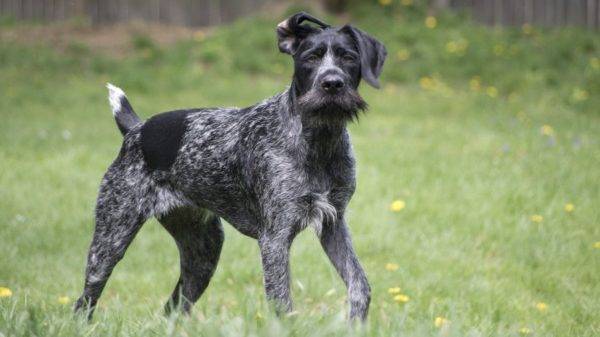 Thick vegetation on the muzzle of the dog can get dirty, and care for the beard and mustache of a Drathaar. Many owners wash it after each feeding and some owners shorten it to keep it out of the bowl, but this tends to spoil the dog’s distinctive appearance.

Hanging ears of a drabhar also require inspection and care. The dog’s eyes must also be cared for, as they are prone to eye disease. An active, impetuous dog traversing dense brush may hurt himself or “catch” ticks. Your dog’s coat should be checked after each walk. Not only the coat but also the skin should be examined to make sure there are no scratches, wounds, or bumps.

The pads of the paws should also be inspected, the nails should be shortened, especially if the dog is not hunting and running on soft ground. Be sure to adhere to the vaccination schedule, deworming once every ½ year. With such care, the dog will live in good health until 14-16 years.

Diseases of the breed

The breed is characterized by diseases that affect active dogs with high loads on the joints of the limbs:

But in addition to these, in the drabathaar there are:

In addition to the listed pathologies, in general, the health of the drabhaar is excellent, strong. But this does not mean that the dog cannot catch parasitic diseases or flesh-eating diseases. Therefore, the darthaar should be periodically examined for prophylaxis and routine vaccinations should be done.

There is an opinion that hunting dogs should be fed only natural food with a predominance of proteins. But today there are a number of special ready-made foods that eliminate the need for a premium, super-premium or holistic dog food.

When feeding natural foods, the diet should contain 30-40% animal proteins. Both whole meat and by-products. The diet of young dogs and puppies should include cartilage, veins – products that contain the building material for joints. 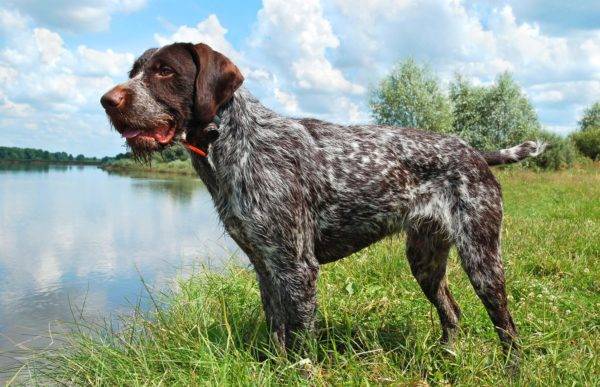 Porridge and vegetables should be 60-70%. It is impossible to overfeed the drabhaar, as a loose dog is a bad hunter, prone to severe systemic diseases. With natural feeding, vitamin and mineral supplements are additionally introduced.

First of all the Drathaar is a hunting dog, active, lively and temperamental, that’s why it suits better if kept at a country house or a farm where it has enough room to run, rummage and satisfy its hunting instinct.

Due to its thick undercoat, it can stand cold and bad weather well. However, when kept in an enclosure, the animal must have a warm and dry “house” with a bed for hiding and resting.

It is possible to keep the Drathaar in cities, too, providing the animal with enough time for walks in the open air and the necessary physical activity. If the dog gets bored or does not expend energy during games and training, he will run around the apartment and spoil things.

Some owners of dogs complain about the strong smell that comes from the hair of the drabkhar, abundant shedding and sloppiness during meals. Therefore, only devoted fans of this breed or inveterate hunters, who often go on nature trips with their pets, are willing to tolerate the Drathaar in apartment conditions. 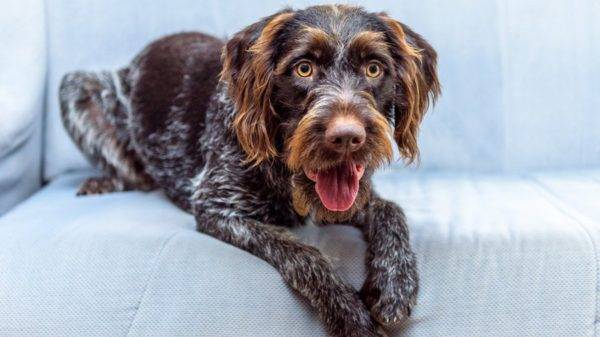 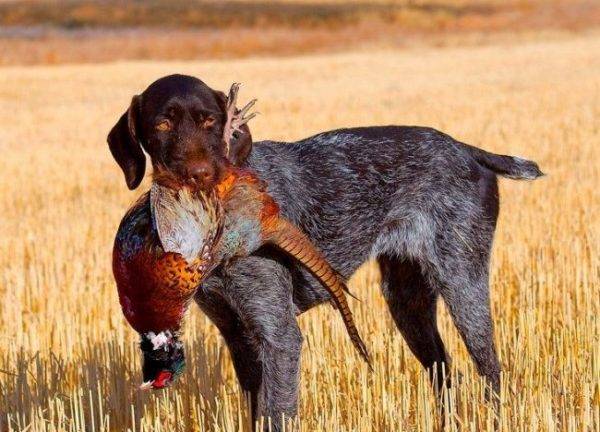 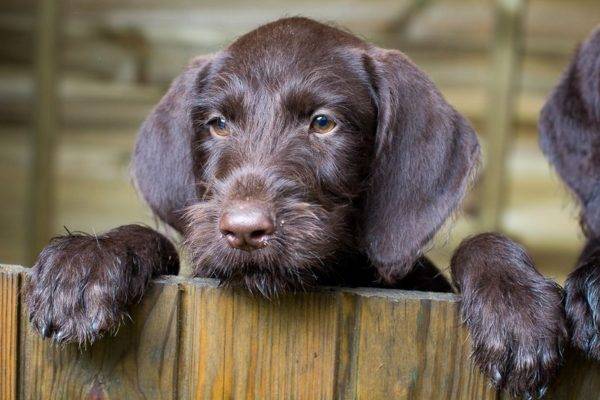 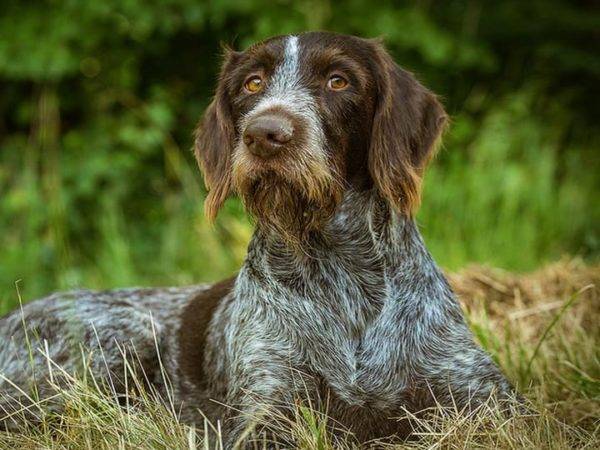 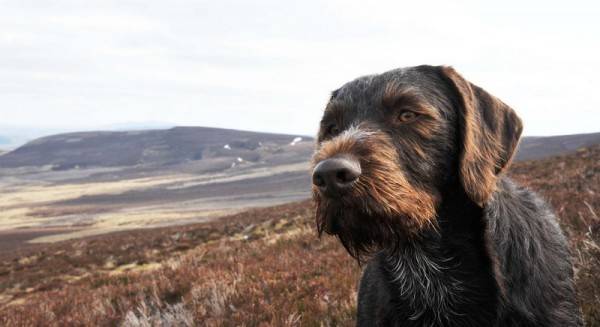 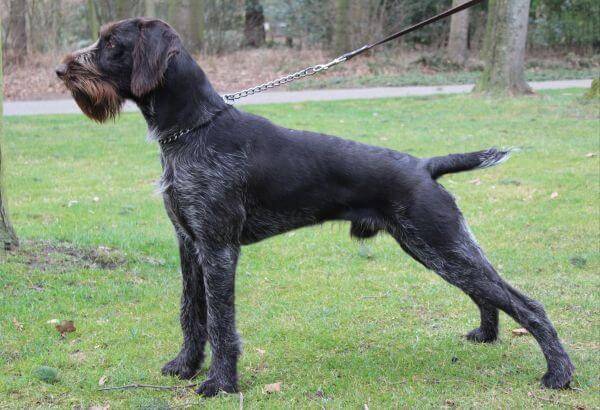 The popularity of the Drathaar is gradually gaining momentum in our country as well, so hunters and breeders who have decided to breed this breed are interested in where to buy puppies.

As before, the advantage is given to kennels in the homeland of the Drathaar. Here, the puppies undergo a very strict selection and evaluation of working qualities. The cost of “foreign” puppy is 400-2500 Euros. The price is influenced by the sex, age and the results of the tests.

Drathaar is a dog for the active, brave and tenacious. Do not buy it to lie on the couch and demonstrate to friends. This devoted, trusting creature can become attached with all its heart to the family and will not endure a change of owners and prolonged separation from them. Therefore, before buying a puppy, you should think about how to provide him with the necessary care, give him love and emotional comfort.