Beagles are representatives of the oldest breed, which was bred for their needs by hunters. The event took place back in those days, when the aristocracy had just begun to emerge. The early Middle Ages were not distinguished by the abundance of entertainment, so the leading position was taken by hunting. Beagles accompanied the nobility on hunting trips and directly participated in the process. So what have the pets of this breed become for humans in the modern world?

Where did the breed come from

Beagles origin is associated with England, although, of course, they were not the first to use dogs for hunting. The ancestors of hunting dogs, according to researches, got to the British Isles from the Ancient States – Rome and Greece thanks to the Celtic tribes. And their interbreeding with local dogs was the basis for the future appearance of beagles. 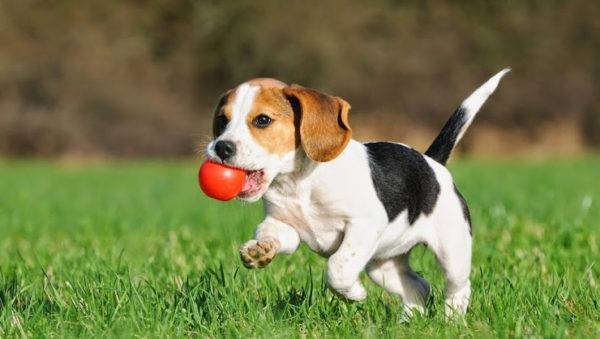 With the formation of the state and the aristocratic stratum of the population there was a need for a pet not only with hunting qualities, but also noble appearance. And the participation of ladies in the hunting amusement made its adjustments – the dogs must be compact. At this point, the active and purposeful development of aristocratic hunting breeds began.

By crossing various breeds of dogs for hunting, breeders and received the breed beagle, so named because of its small size. The first record of them is dated 1475.

Development of the breed continued in the 16-17 centuries, beagles gradually ceased to be exclusively the favorites of the nobility. At that time they could be found on large farms and even on landowners with average wealth. This had a positive impact on the quality of the breed, as hunting became solely for show and entertainment, and it began to attract more impressive pets that are inferior in hunting qualities, but have a more original appearance.

Owners were engaged in cross-breeding their pets with dogs living in the same area as the Beagle, so experts distinguish several types of the breed. Southerners turned out to be slower and heavier, while northerners are distinguished by a leaner body and mobility.

In the second half of the 19th century the breed died out, but its extinction did not happen thanks to the admirers of beagles and classic hare hunting. The Englishmen did their best, they not only kept the breed, but also revived its former popularity.

Beagles became full participants of exhibitions and shows, and at the end of the century the first official club of this breed was formed. The breed standard was approved five years later. At the same time there was a revival of hunting with the participation of these dogs.

Today, Beagles are excellent companion dogs around the world, and only in England do they continue to be used in their original capacity. Given their excellent sense of smell, Beagles are sometimes used for serious customs. For over a hundred years the Beagle has been on the list of the most prestigious breeds.

Description of the Beagle breed 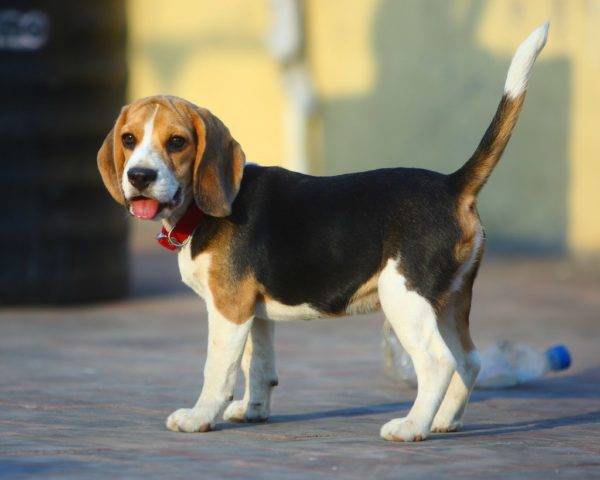 Photo of the beagle dog

The standard of the breed, adopted for the first time, was adjusted several times, so in the modern evaluation of dogs apply the data of the document in 1987:

The beagles’ coat color does not differ in any way from the color of other hounds. According to the standard, the tip of the tail should be white. The color may include:

The main qualities of beagles are cheerfulness, good-naturedness and activity. They feel perfectly well among the children’s company, and with all their paws stand up for any playful activities. Enjoying themselves at play, they can allow their “little” friends to do all kinds of manipulations with them.

They are great at interacting with other dogs and people, as beagles are devoid of dominant tendencies. This is the result of keeping them in pens. And among family members, they often choose a child as their master. Therefore, representatives of this breed can be purchased for children. 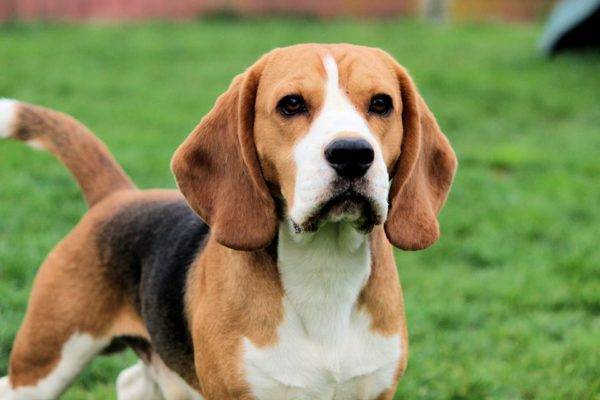 Beagle dog breed on the photo

They also get along well with other pets, but it is worth remembering that beagles have strong hunting instincts. Therefore, smaller animals – rabbits, rodents, cats will be seen as prey. Yes, the Beagle can live together with cats, but those will have to periodically act as game and run away.

Representatives of this breed are very smart and intelligent, but their mind is more sophisticated. They do not like training and in every possible way shirk from it. Many owners will agree with this definition of dogs – “charming cheeky,” and their actions are aimed at taking advantage of the weaknesses of the owner. Once a beagle is allowed into their bed, owners will always have to share a sleeping space with them. They are difficult to get accustomed to the place, because they move around actively and fall asleep in places “where the night finds.

In addition to activity they are curious about everything, so if you leave them alone you may find a lot of surprises on your arrival. Like most hunting dogs, beagles have a habit of chasing their intended prey when out walking. During this time, they cannot see or hear what is going on around them. This quality causes most owners to take their dogs out on a leash.

In addition, they are enormous gluttons, and their satiety center is almost non-operational. The result of this is another bad habit – at home, the inspection of the trash can, on the street – the container. It is necessary to avoid such gusts of the pet with all its might from the very first day.

How to feed the beagle

When acquiring a purebred representative of the beagle, you must remember that the beagle is a hound that needs to move a lot. Many kilometers of daily runs are a guarantee not only of the well-being of the dog, but also of order in the house. Therefore, you should assess your strength and ability to provide such active walks.

Without the necessary exercise, the dog gets fat and begins to have health problems. In addition, overweight is promoted by pets’ passion for begging and even stealing food. This can also include the beagle’s constant hunger, which forces owners to feed the dog more than the proper amount. If the pet runs often, but also gains weight, then his daily portion should be reduced. 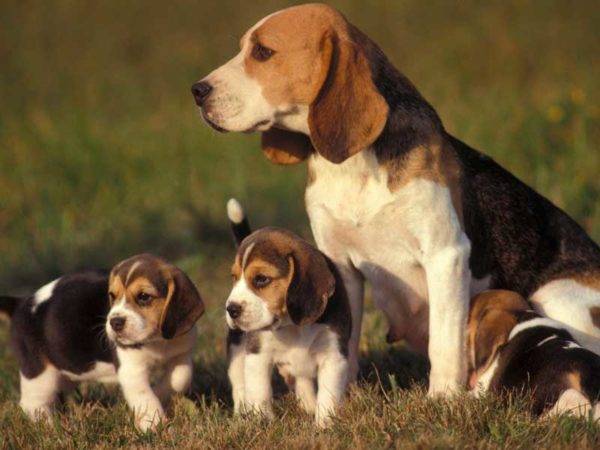 Photo – Beagle puppies with their mother

In the diet of the beagle, gruel should make up no more than 25% of the total food. The basis of the menu is meat products and by-products. It is obligatory to give vegetables, but they make up only 10% of the daily norm.

Fish can be given, but only sea fish in boiled form and no more than a couple of times a week. If the pet has been used to getting dairy products since puppyhood, you can continue to give them as an adult dog.

Another common type of feeding is pre-prepared food. A good option for beagles, as you can dose the portion more precisely, and the balance of useful components is calculated as much as possible.

Read more: what to feed the beagle.

Beagles has quite standard care of their coat: from time to time they need to bathe the dog, comb out dead hair with a stiff brush.

A dog does not need frequent bathing, because detergents can remove the natural fat layer, exposing the skin to pathogens. For the beagle, a bath once every 3-4 months is sufficient. Naturally, if the dog gets very dirty, a bath is just necessary.

Long ears require regular cleaning with special solutions. The eyes, on the other hand, are the breed’s weak point and should be washed daily with antimicrobial agents. As soon as discharge from the eyes is detected, they must be treated immediately. 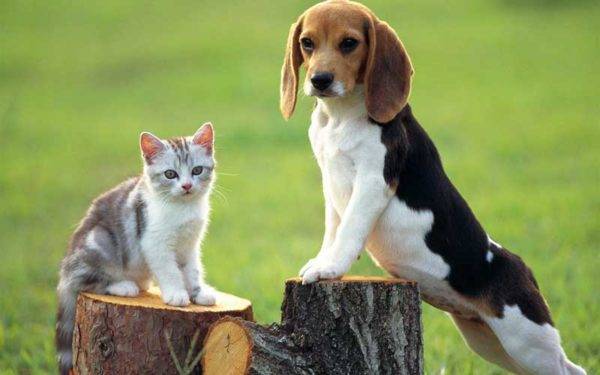 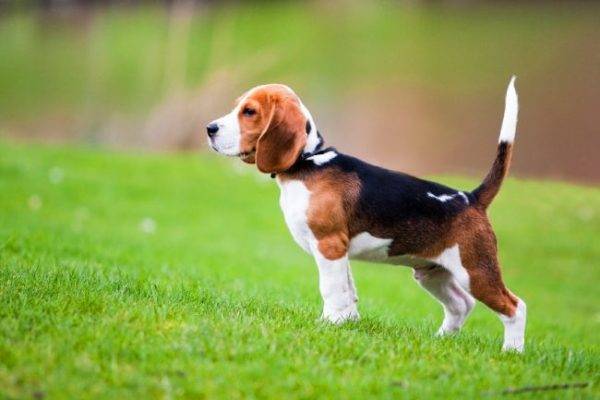 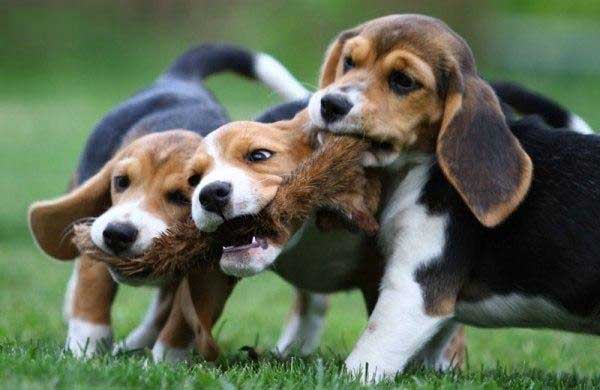 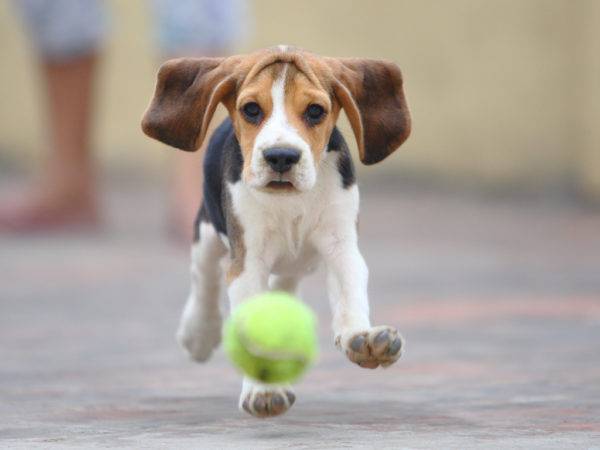 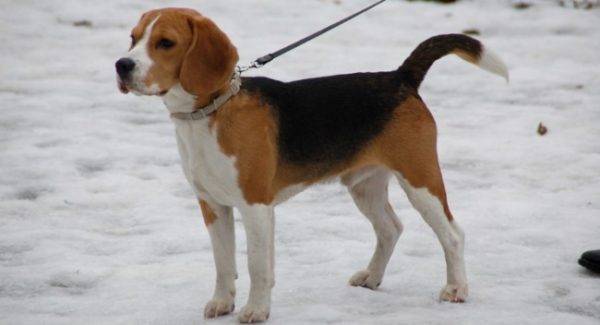 It is much cheaper to choose a beagle pet simply as a family pet, without assuming any show events or continued pedigree. In this case, it’s enough to come on the ad or visit the kennel and buy the most appealing little guy. The task becomes more difficult if purchased Beagle for hunting or subsequent participation in exhibitions.

It is important to get reliable information and feedback about the breeder of the breed, get acquainted not only with the puppy, but also with his parents. Dogs for exhibitions and participation in breeding should fully meet the standard parameters, this should also be made sure.

Experts warn that beagle puppies acquire adult coloring by the 3rd month, so spots and color stripes existing to this age, more often on the head, ears and back, may disappear.

Representative of the breed show class will cost at least $3000. Medium breed puppies cost anywhere from $1000 to $3000. Of course, the price affects the fame of the breeder, the regalia of the parents of the pet and other factors.

The Beagle is a great option for active, cheerful people who have a great patience and a good sense of humor.