The Central Asian shepherd dog, or Alabai, is a large dog, from which you can smell strength and a certain power. This breed has passed many centuries of natural selection and received from the ancestors all the best guarding and fighting qualities. In addition, it is a proud and freedom-loving dog from Central Asia, which requires a certain amount of experience from the owner. What are the features of the breed, and how difficult is it to keep this animal?

Origin of the breed

The descendants of the Alabai are the most ancient Central Asian breeds – the Tibetan Mastiff, the shepherd dogs of nomadic tribes and the Mesopotamian fighting dogs. Scientists have found evidence that Central Asian sheepdogs already existed 2,000 years ago BC. Back then they were powerful animals with short muzzles and strong jaws.

Throughout its existence, the Alabai was noted for its excellent guarding qualities. They were actively used for guarding large objects and were put on guard. Their skills are indispensable for protection of livestock from predators. Dogs fearlessly entered the fray and in doing so came out victorious. Alabais are excellent hunters, able to help in the capture of animals much larger than them – bears, wild boars, and even elephants.

In the 30s in the USSR, breeders began active work on the breed Alabai. Near the end of the 20 century, a new type of Central Asian shepherd dog, the “Turkmen Alabai”, appeared. The breed took root, and to this day is considered the best guard dog.

Characteristics of the breed Alabai

Possessing a massive build, the Alabai does not look clumsy. Its body maintained all proportions, movements are harmonious. It has a voluminous musculature, but without relief, with a well-developed chest. The abdomen of the dog is collected, lean. Clearly distinguished lumbar part. The skin is dense and elastic.

Representatives of this breed are rather high – males start from 75 cm at withers, bitches – from 65 cm. Females have an elongated torso, compared to males. Height in excess is welcomed, as long as all the proportions of the body and the animal are maintained. The weight varies within the range of 75-80 kg.

The external distinguishing features of Alabais are as follows:

There are several colors of the Central Asian shepherd dog: black, pale, gray, tiger and red. A coat of chocolate shades and blue, as well as any combinations thereof, is considered a marriage.

Nature has arranged so that the Alabai have great strength, they are hardy, fearless and at the same time can make their own decisions. Studies have shown that these pets have a very high intelligence. All these qualities in combination make the dogs universal – they can graze livestock, guard, and perform a protective function. In addition, in their homeland, these dogs are used for fighting.

The instinct of the pack has been instilled in them for centuries, and they calmly obey those above them on the hierarchical ladder. But despite this, very free-loving. 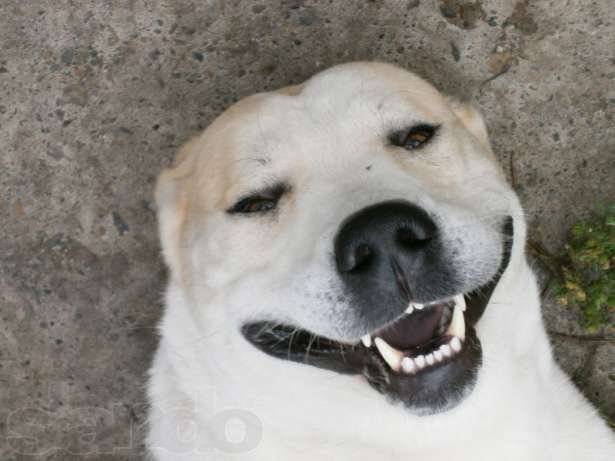 Representatives of this breed can be kept both in urban conditions and in the country house. But the owners of the pet should know that the captivity of the Alabai pet is poorly tolerated, so you should not keep it on a chain.

These formidable-looking dogs have a complex character that requires a special approach. To protect the house was more reliable, it is worth to get two individuals at the same time – a male and a female. They will get along well with each other and complement each other perfectly. Females are extra cautious and will often bark at an object of threat as long as it is at a distance. At the same time, they are more inclined to obedience and are very good at following commands.

Owners should be prepared for the fact that female Alabais are quite cunning and can get their way. Like all females, they “love with their ears,” so the dog should be talked to, stroked, and cared for.

Dogs are more reckless and in case of danger they show all their aggression, acting without warning. It is not advisable to take more than one male dog to guard the territory, because the laws of the pack will sooner or later begin to fight for leadership. The war often ends in blood. Bitches will also behave in a similar way, but their fight is not as violent. 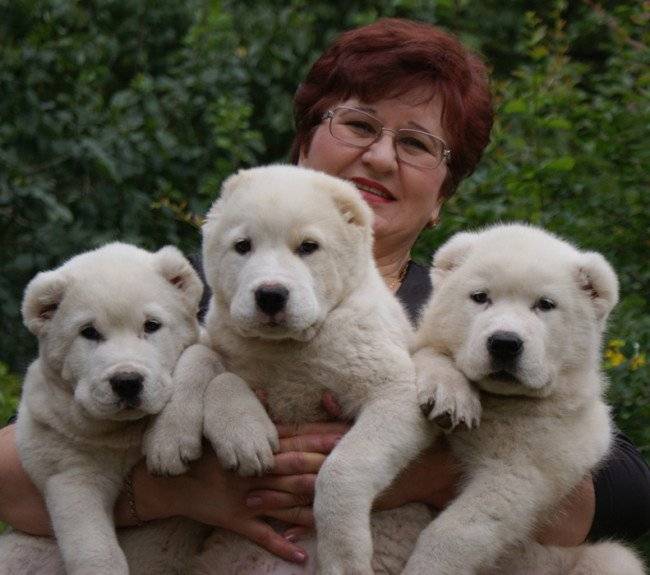 Pedigree pets have a very developed breeding instinct, so the owner of the female must necessarily knit her, at least 3-4 times, otherwise she will not be controlled and may show unreasonable aggression. Male dogs, on the other hand, smelling a bitch in heat can do wonders – breaking down fences, jumping the highest barriers. To hold them back you’ll need a high fence and a chain.

Starting this “formidable weapon”, the owner must immediately prove his superiority. The dog must understand from the first time that the master in the house is a man. If there are no training skills of such dogs, it is worth to ask for help from a professional dog handler. A specialist can make a pet not only a workhorse, but also a companion dog that can get along with all family members, even small ones, and is tolerant of other animals.

Alabais are very easily offended and remember offense for a long time, so you should not scold them and punish without good reason.

It will also be interesting to read reviews about the alabai.

Peculiarities of care for the alabai

Having a certain independence, the Alabai is not a chain dog, and this obliges owners to certain actions. While not requiring special care, dogs still need to follow certain rules:

The Central Asian shepherd dog has a constant need for exercise. To get rid of energy, the dog should move a lot, run a lot. Long walks will help in this. In addition, you should take it out for a walk where you can let it off the leash without endangering it or others.

Alababies require obligatory attention from their owners. If he is not socialized, the pet may feel lonely, abandoned and unwanted.

As for housing, for more comfort, the dog should have an aviary. It can be purchased in ready-made form, ordered, or built by yourself. In any case, the dog will feel better, while not in a cramped apartment and not on a leash. It is desirable to equip the fence and a special dog kennel. The pet will be able to stretch his paws, move around or rest under the roof of the kennel whenever he wants. Besides, it is good for the dog’s psyche, because a chained Alabai is more unbalanced and aggressive and is trying to loose himself all the time.

If the dog is in an enclosure, you should not forget about regular walks. Only in this way, the pet will be able to get the necessary strain. If there are no suitable conditions for keeping a representative of this breed, then maybe it makes sense to choose a dog that does not require the installation of an aviary?

What to feed the Alabai

Before becoming the owner of such a powerful dog, it is worth to know what to feed it? After all, the health, normal development and excellent health of the dog depend on a nutritious diet.

There is an opinion that dogs living in natural conditions should be fed the same way they would eat while living in the wild. However, above all the diet of the animal must be based on two indispensable conditions – the food must always be fresh, and feeding must be carried out twice a day, at the same time. The regime must be established as early as the puppy’s age. 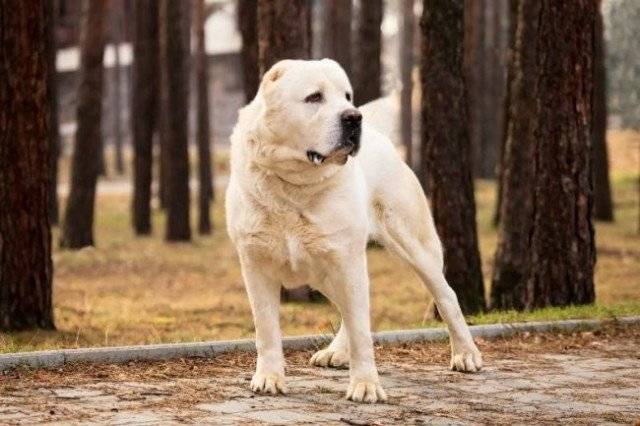 In the photo, an alabai with its mistress

The food of babies and adult dogs is different. Young dogs do not digest food containing a lot of calories. Puppies should not be given larger portions than the norm, as this will accustom the dog to eat more than he needs. This will be detrimental to his gastrointestinal tract and his body in general. And, in addition, it will lead to obesity.

One-and-a-half to two-week-old puppies can be fed warm cow’s milk, with the addition of raw chicken eggs. Food for babies should have a liquid consistency. The diet should include meat and vegetable soups, porridge, boiled chopped vegetables, cottage cheese, sour milk, minced meat. As natural vitamin supplements, fish oil, fresh herbs, beet and carrot tops will do.

The adult pet is fed twice: in the morning and in the evening, and with an increased load, pregnancy, you can feed three times a day.

The animal’s menu should include products containing as much protein as possible – milk and dairy products, various meats, sea fish, some kinds of cereals – buckwheat, rice, herkules, millet. It is allowed to include fats of animal origin into the diet of Alabai, but it is better to refuse from vegetable fats, because the organism of this breed hardly assimilates them.

Alabai need salt, so it is necessary to salt the food of the dog (no more than 20 grams per day). As with other carnivores, the main food in the menu of these pets should be meat, it can be from domestic or wild animals. Vegetables, cereals, bread (gray or black) are added to the meat. The food of adult pets is enriched with vitamins and micronutrients in the same way as babies. Do not give alabais spicy bones and food flavored with spices.

Read more about what to feed the alabai.

Photo of a Alabai

Check out these amazing Alabai photos. 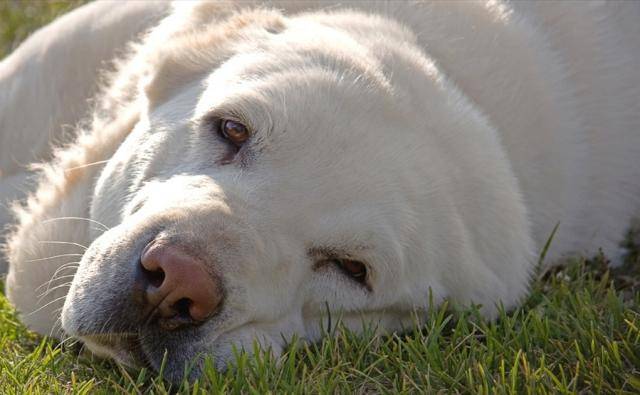 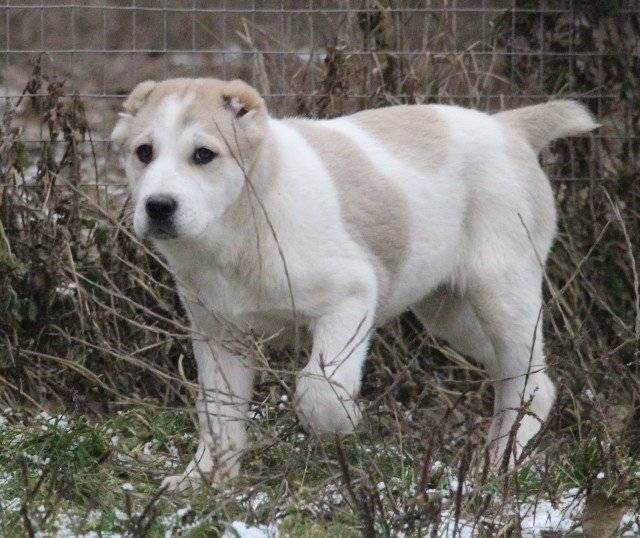 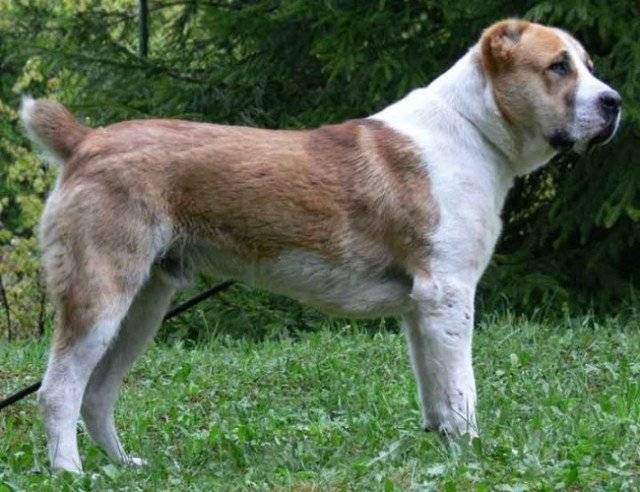 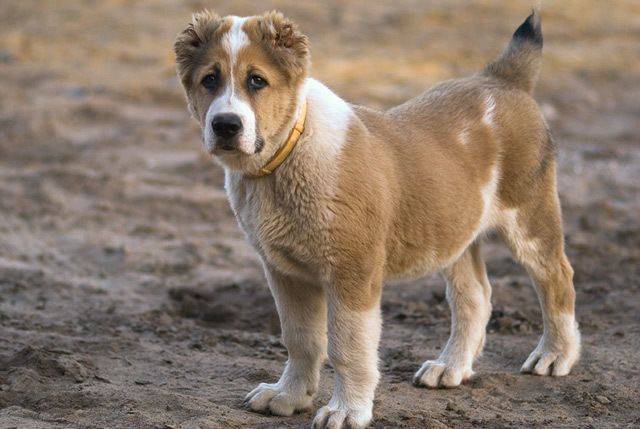 How much do Central Asian shepherd puppies cost

Of course, first and foremost, the price of puppies of any breed depends on how popular and rare they are. Dogs with such a character and considerable size are most often taken for security purposes, and mostly in pairs – a boy and a girl. Naturally, such a union brings offspring, most often unplanned. Puppies have no pedigree, so you can buy them inexpensively, their average price $800.

Puppies with a pedigree will cost more. If the baby is purchased from renowned breeders, born of titled parents, its price starts at $3500 and above. Before buying, it is necessary to weigh all the pros and cons, taking into account the peculiarities of the Alabai breed, suitable conditions and the unusual nature of the pet.